Busting out of the blocks:

Tastes have changed a lot in films and television over the decades. Summer was the time for the big blockbusters, a trend that began with The Towering Inferno in 1974, Jaws in 1975, and Star Wars in 1977. These films took audiences on a ride and were designed to elude deeper analysis or meaning. But in the last twenty years, it has changed further and the high-budget, effects-heavy films now come out year-round, while television further embraces ambitious, long form science fiction projects such as The Mandalorian.

One major change in this time has been the rise in the use of  virtual production as projects—both for cinemas and television—have begun to eschew tradition in favor of a streamlined path from concept to final cut.

Niklas Bothe is head of motion capture at OnPoint Studios in Berlin. Working day-to-day in this industry, he sees the changes from a closer, more-intimate perspective. “The switch to virtual production,” he says, “has been an ongoing development, particularly over the last fifteen-to-twenty years. The use of green screen, particularly in the nineties, moved the game forwards and we’re seeing this year, in the light of coronavirus, a lot of CG movie productions being done remotely. It’s definitely a trend.”

The term ‘virtual production’ purposely covers a lot of ground and could uncharitably be described as being purposefully vague. But this definition from leading effects house Weta Digital, owned by Peter Jackson and responsible for The Lord of the Rings and The Hobbit movies, states that it is, ‘[…] where the physical and digital worlds meet’.

This fuller, more-detailed definition comes from Cartoon Brew: “[…] virtual production can really refer to any techniques that allow filmmakers to plan, imagine, or complete some kind of filmic element, typically with the aid of digital tools. Pre-vis, tech-vis, post-vis, motion capture, VR, AR, simul-cams, virtual cameras, and real-time rendering – and combinations of these – are all terms now synonymous with virtual production.”

The process differs from traditional film production in several ways, but ultimately offers a more-efficient way of working. The Virtual Production Field Guide does a good job of outlining the differences.

The authors state, “In contrast to traditional production techniques, virtual production encourages a more iterative, nonlinear, and collaborative process. It empowers the filmmaker (including department heads) to collaboratively iterate on visual details in the moment, not deferring all of these decisions to post.” 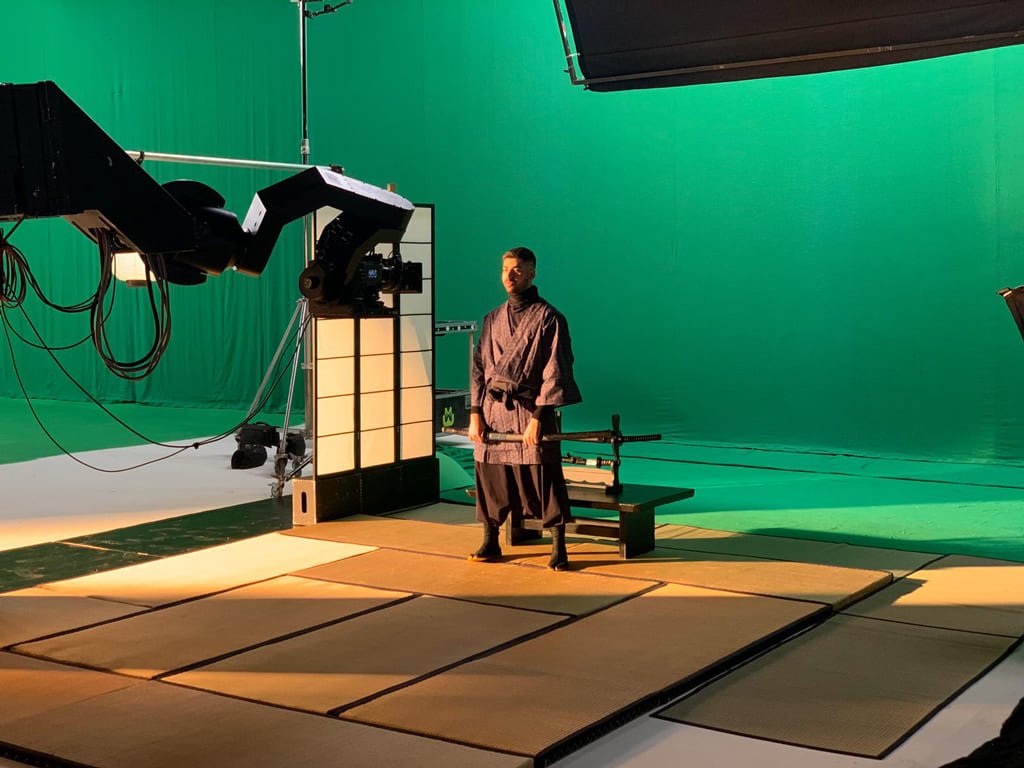 Monet192 with robotic arm MILO for his music video “Diamonds”

In December 2019, OnPoint were approached by A Current State. A previous collaboration between the companies had led to the Berlin team working on the motion capture, using the UnReal Engine, for Robin Schulz’s ‘In Your Eyes’ (more about this project here). Now, the brief was to create a promotional video for Swiss rapper Monet192 and his song ‘Diamonds’.

The concept for the video was a throwback to old samurai dramas, but with modern, striking visual effects using the game engine mentioned above. It begins with Monet192 in a house on a mountain, then cuts to a figure climbing to a high platform where someone in Samurai armor waits for him. A sword fight ensues. Eventually, the interloper wins and the samurai lies dying. It is revealed that both characters are played by Monet192.

“The client came to us with the whole concept to see whether it would be possible,” says Niklas. “Since we already knew great stunt guys, we were able to put it together. We even got to play with the MILO rig for the more-fluid camera tracking. But it was great fun; it’s exciting when you start fighting with katanas.”

The future of Virtual Production

The guys at OnPoint are pleased with their work, especially from a technical point of view, and it underlines their confident that virtual production techniques will increasingly take a central role in how films and television are made.

Says Niklas, “It’s a good choice for creators when you have something like a science-fiction project such as The Mandalorian that needs different backgrounds and virtual sets each day. There will, however, always be room for real actors and live-action sets. Nothing is getting replaced any day soon.”

2.    It empowers filmmakers to collaboratively iterate on visual details in real time.

3.    It brings iteration forward in the schedule.

4.    It can produce high-quality imagery from the outset.

5.    It makes assets cross compatible and usable from beginning to end.

6.    Problems can be discovered at an earlier point during production and solved easily